Organic food isn’t that much more expensive anymore. Here’s why

One thing that financial and nutritional health have in common is everyone needs a budget that works for their goals and abilities, whether this is tracking money or calories. Shopping for food requires attention to both financial and eating habits, as well as personal desires or choices like eating organic or skipping meat.

The U.S. Department of Agriculture (USDA) tracks changes in food pricing by looking at snapshot data of prices across various items. To find trends among food pricing and where consumers could be saving, MagnifyMoney researchers analyzed prices for organic and conventional meats, dairy items, fruits and vegetables in 2019 and 2021.

Some findings may not be surprising, like organic foods overwhelmingly costing more than conventional, but the data suggests that could change in the future.

If you’ve shopped for groceries, you probably have noticed the price differences between foods with an organic label and conventional products. Organic foods generally cost more for consumers due to higher production and labor costs, as well as limited supply. For those organic-preferring shoppers, the good news is the costs of organic produce, dairy and meats are rising slower than conventional foods. 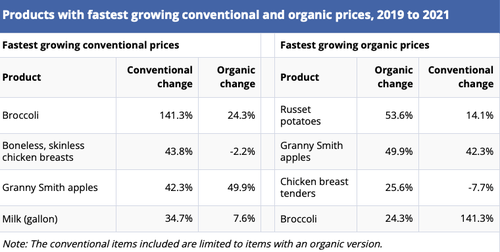 By category, conventional dairy items have escalated the fastest since 2019 at an average of 25.6% across cheeses, milk and yogurt. Non-organic produce prices jumped an average of 13.1%, while the average cost across different cuts of regular chicken grew by an average of 4.9%.

Fruits and vegetables represent the only organic group to record average price growth — granted, the number of items sampled is also the largest. Organic produce prices grew at an average of 2.8% since 2019, while organic dairy and chicken prices dropped by 0.9% and 0.4%, respectively, on average.

Even though conventional food prices have risen significantly while organic prices remained fairly stagnant, conventional prices still beat organic for nearly every product in the sample. Sweet onions are the only item among the tracked prices where shoppers may save by buying the organic variety. A pound of organic sweet onions costs $1.11, compared with $1.23 per pound for non-organic — a 9.8% difference.

Otherwise, organic items cost an average of 70.7% more than their conventional counterparts. Though the difference in prices is typically less than a dollar per pound/package/etc. for fruits and vegetables, the difference in chicken pricing varies widely between conventional and organic. Chicken thighs have the greatest price disparity by percentage (321.6%), with a pound of conventional thighs costing just $1.16, versus $4.89 for organic. Both varieties of chicken thighs have dropped in price since 2019, but organic prices continue to dwarf conventional.

Regardless of cut — thighs, breasts, drumsticks or whole — conventional chicken costs an average of 188.5% more than organic. Consumers pay as much as $5.86 more a pound for organic chicken.

Though saving a few dollars to buy conventional food might not seem like a major budgeting win, when you consider MagnifyMoney’s finding that 3 in 10 consumers withdrew money from their retirement funds in the early weeks of the coronavirus pandemic to pay for necessities including groceries, those little extra savings can make a difference in a pinch.

While overall that growth isn’t too much more than conventional fruits and vegetable prices (13.1%), cuts of meat that have seen the greatest price gains have increased rapidly. Just one produce item — broccoli — has increased by more than the beef, pork and chicken cuts with the largest average retail price jumps by percentage since 2019.

All hope is not lost for budget-friendly carnivores, though. Where meat prices have shifted down, the changes haven’t been nearly as significant as the increases. Across the meat cuts with the largest two-year price drops, costs have declined between 17.1% and 41.2%. Beef brisket saw the biggest price reduction. 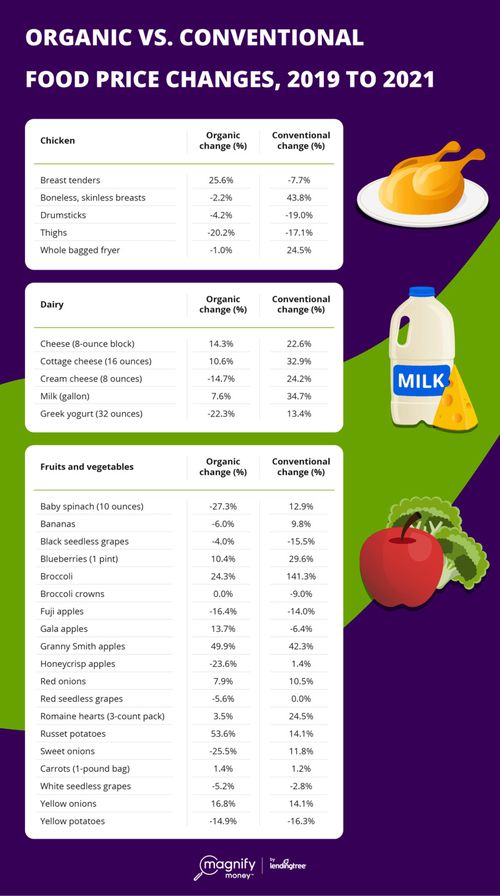 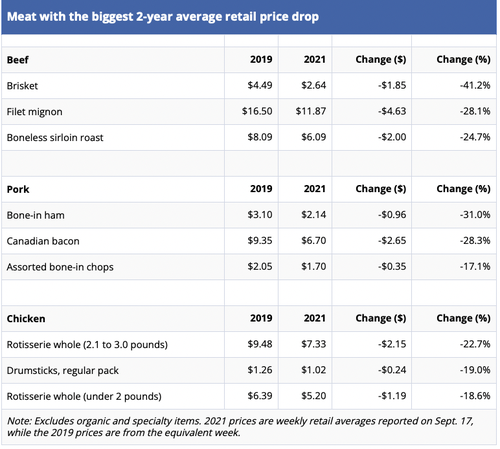 MagnifyMoney analysts reviewed weekly retail pricing data from the U.S. Department of Agriculture (USDA). 2021 snapshot data is from the week ending Sept. 17, while the 2019 snapshots are from the equivalent week.

This article originally appeared on Magnify Money and was syndicated by MediaFeed.org.

Organic makeup products you can buy on Amazon

Organic makeup products you can buy on Amazon

Previous Story:
How to decide how much to spend on your wedding
Next Story:
Do you own one of the 10 most stolen cars in America

About the Author / Kamaron McNair