When visitors would come to the Crave Brothers Farmstead Cheese creamery in Waterloo, WI, George and Debbie Crave would serve them cheeses, and then they would also serve them desserts made with their mascarpone cheese. “We never served people tiramisu when they came here,” says George Crave, founder and president. “We want to take mascarpone beyond tiramisu,” adds Debbie Crave, vice president. “Everyone knows tiramisu,” says Roseanne Crave, their daughter and sales and marketing manager for Crave Brothers Farmstead Cheese. “Instead, we would serve them our chocolate mascarpone pie. It’s a 4-ingredient recipe, and it’s always been a favorite.”

Debbie Crave came up with the recipe, and it’s been a crowd-pleaser from day one. “During our many years of making chocolate mascarpone pie, we would put in different flavorings like bourbon or raspberry liqueur or Kahlua or Irish cream, and we would take it to parties and bring it to different events, and everyone would always rave about it,” says Roseanne. 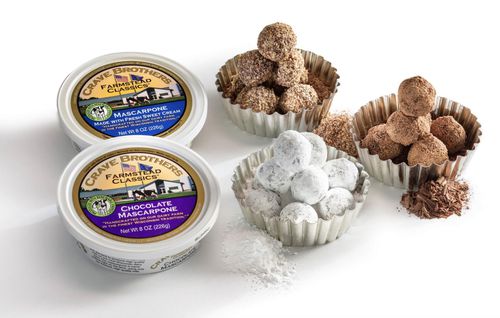 To come up with the recipe for their flavored mascarpone, they couldn’t just follow the recipe for the pie, which called for melting chocolate, then mixing it in with a flavoring like coffee or liqueur, as the resulting cheese would not have been shelf stable. Instead, George and his team worked with a supplier to come up with the right blend of chocolates and cocoas and natural flavorings to impart the right chocolate flavor without covering up the taste of the sweet, creamy cheese.

“You can’t just blend ingredients into the cooked cream and have the (chocolate) flavor come out,” George says. “We tried different combinations, we tried different cocoas and chocolates, and then it was pretty magical when we hit upon the right profile.” The result is a decadent, creamy cheese that smells like a chocolate bar and boasts of a subtle yet pronounced chocolate flavor that’s balanced and doesn’t overpower the cream. “That’s the secret,” George says. “The cream doesn’t get covered up by the chocolate, and the chocolate has to marry well with the cream and doesn’t get hidden by the cream.”

Since its debut, Crave Brothers chocolate mascarpone has been scooping up awards at local, state and international competitions. “The biggest surprise for us is just the level of competitiveness it has in competitions,” George says. “It’s consistently at the top of its class, and for a flavored cheese to go against the other iconic cheeses from our state or around the country is really amazing. We giggle about it, and we’re really proud of it. It just has that much of a wow factor for the judges.”

HOW TO USE CHOCOLATE MASCARPONE

Debbie and George say that customers love it, but they’re always inquisitive. “They always ask ‘how do you use it?’” Debbie says. Besides the original pie, it goes great on dessert platters, served with fruits, cookies or cakes. It makes a terrific cannoli filling, goes great spread on bagels or croissants, and goes great in bread puddings, cheesecakes and even as frosting for cakes and cookies. It even has savory uses. “We had a recipe contest, and a chef came up with a pork tenderloin dish with chocolate mascarpone dipping sauce,” says Roseanne. “It also goes great with candied bacon. And you can add it to your dessert drinks like a grasshopper or a mudslide.” It can also be used to make truffles and brownies.

This article originally appeared on TheChocolateProfessor.com and was syndicated by MediaFeed.org.

Sweet facts about chocolate we bet you don’t already know

Previous Story:
How to become a cat shelter volunteer in the new year
Next Story:
27 high-paying, fulfilling jobs for extroverts

About the Author / Jeanette Hurt