Beer, wine, and spirits are co-conspirators in one of the kitchen’s biggest myths. It’s widely believed that dishes made with alcohol are rendered non-alcoholic in the process of, say, simmering a beurre blanc sauce or baking a bourbon pecan pie. In reality, no matter how long it is sauteed, broiled or boiled, a recipe can never be fully rid of its alcohol.

As a substance, alcohol is volatile, explains Harold McGee, author of On Food and Cooking: The Science and Lore of the Kitchen. Its molecules will evaporate not just when alcohol reaches its boiling point, a chilly 173 degrees Fahrenheit compared to water’s 212 degree Fahrenheit boiling point, but any time it is exposed to the air.

Despite its ability to dissipate, “it’s impossible to cook out all of the alcohol [in a dish],” says McGee. Even after extensive heating, a small proportion of its molecules will remain bonded to molecules like water present in the mixture. How much sticks around depends on several factors, including the recipe’s other ingredients, the temperature it is cooked at and the length of time for which it is cooked.

“The higher the temperature, the quicker the evaporation,” McGee explains. “The longer the cooking time, the greater the cumulative evaporation.”

According to the U.S. Department of Agriculture (USDA), baked or simmered dishes that contain alcohol will retain 40% of the original amount after 15 minutes of cooking, 35% after 30 minutes and 25% after an hour. But there’s no point at which all of the alcohol disappears. Baking or simmering an alcohol-containing dish for 2.5 hours will still leave 5% of the alcohol content behind.

One thing the USDA’s chart doesn’t take into account is the size of the pan in which the alcohol is cooked. “The greater the surface area, the greater the exposure of the alcohol molecules to the air, the faster they will escape,” says McGee. So, there will be less alcohol in a beurre blanc sauce simmered in a large stockpot than one simmered in a small saucepan; mini bourbon pecan pies will be more alcoholic than a single large pie.

Exactly how alcoholic the 40% or 25% or 5% of alcohol leftover in a dish after cooking directly depends on the ABV, the alcohol by volume, of the liquor used. When cooked at the same temperature, for the same period of time, in the same sized pot, the alcohol molecules in beer and rum will evaporate at the same rate. However, beer typically has an ABV that ranges from 3.5% to 9%, while the ABV of rum is typically around 40-75.5%. Consequently, even when all other conditions are the same, the completed dish will be less alcoholic when made with beer than that when made with rum.

Although alcohol remains, it’s highly unlikely that dishes cooked with alcohol will cause intoxication. The amount of wine, beer, or spirits found in most recipes is so small that, even if left uncooked, an adult would never feel its effects. Still, an alternative might be preferable when preparing food for children, pregnant women or those in recovery. 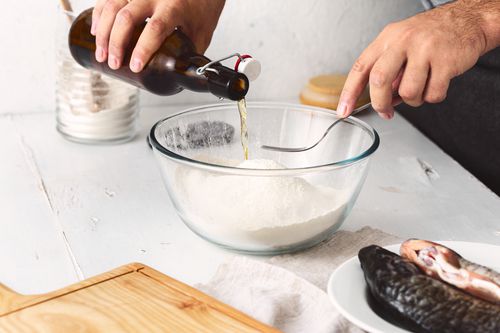 How To Substitute Alcohol

There are some simple substitutions that can replicate similar flavors to wine, beer, and spirits, says McGee. “You can give the impression of a hoppy beer with a little coriander and malt syrup; wine with a little vinegar, though wine vinegar do still contain a small amount of residual alcohol; vermouth with something like Seedlip botanical distillate; rum with a little brown sugar and vanilla.”

Alternatively, try switching out the liquor for a non-alcoholic beer, wine or spirit which will have all of the flavors, without the ABV.

This article originally appeared on Alcoholprofessor.com and was syndicated by MediaFeed.org.

These vintage booze ads will make you remember summers gone by

Previous Story:
The best US cities for an early retirement
Next Story:
Are inflation woes hurting your health?

About the Author / Shoshi Parks