Retiring into a bear market: 5 common mistakes to avoid

We are currently in the midst of a bear market, and for those nearing or in retirement, this can be a scary time. A bear market occurs when “securities fall 20% or more from their previous high,” an event which happened this week to the S&P 500.

The stock market has been volatile recently, with steep drops and recoveries happening seemingly overnight. Retirement portfolios have taken a hit, and many people are left wondering what to do next.

For those nearing retirement, it is important to take a step back and assess what to do in light of the situation. This bear market may have damaged your portfolio, but there are steps you can take to weather the storm.

In this article, we will discuss common mistakes people make when retiring into a bear market and how to avoid them.

Mistake 1. Pulling Out When Stocks Are Low

The most obvious mistake one can make when retiring into a bear market is to sell stocks when they are low. This can be tempting when the market is down and times look bleak, but it is important to remember that bear markets are temporary. The market will eventually recover.

Bear markets are a normal part of the market cycle. A bear market may last for several months or even years, but eventually the market will rebound and reach new highs. There have been 28 bear markets since 1928, all of which have eventually recovered.

An investing philosophy that many financial advisors recommend is for you to consider “time in the market, not timing the market.” Many novice investors make the mistake of guessing whether the market will continue to decline, and they attempt to time when they will get back in.

However, trying to time the market is difficult, if not impossible. More often than not, it leads to people buying high and selling low. Instead, you should focus on staying invested for the long term and ride out the market’s ups and downs.

95% of financial firms fail at beating the market, even with millions (or even billions) of resources invested in attempting to do so.

Look at the 10 Leading Economic Indicators

Before making any decisions about your retirement portfolio, it is important to consider the current state of the economy.

There are 10 leading economic indicators (also known as LEIs) that can give you a good idea of where the economy is headed. These indicators include:

Analysts use LEIs to assess whether the economy is headed toward a recession. For soon-to-be retirees, the good news is that only a small number of these indicators currently suggest that we are.

Mistake 2. Not Pushing Back the Retirement Spending Smile

Retirement spending is often described as a “smile.” This is because retirees tend to show a high amount of spending early on (travel, experiences, etc.), followed by a decrease in spending, and followed again by an increase in spending later on, often due to high medical bills. 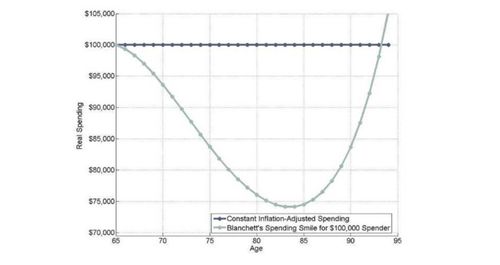 Many retirees make the mistake of not starting out their retirement with modest spending if the market is down. This can have a major impact on your portfolio and cause you to run out of money later in retirement.

Instead, retirees should start out with a modest lifestyle, postponing big trips and other big expenses. You might even consider pushing back their retirement date. This will give your portfolio time to recover from the bear market and not force you to sell stocks while their value is low.

Mistake 3. Not Planning Ahead

Not Having Cash Reserves to Keep from Selling Securities

A common mistake people make when retiring into a bear market is when they fail to ensure they have cash reserves. This can force you to sell securities at a loss to meet your living expenses.

It is important to have enough cash on hand to cover 6-12 months of living expenses.

Of course, you can only prepare cash reserves in advance. For this reason, it is important to start saving early and have a plan in place for bear markets.

Not Shifting Equities to Income

Another mistake people make when retiring into a bear market is not shifting their portfolio’s asset allocation from equities to income-producing securities like bonds. This can leave you exposed to the stock market and force you to sell securities at a loss.

Instead, retirees should consider shifting their portfolios from equities to income-producing investments such as bonds and dividend-paying stocks. This will help provide stability and reduce the chance of having to sell securities at a loss.

A Nobel Prize-winning theory in modern portfolio management says that the least risky portfolio is one with 67% bonds and 33% equities.

It is recommended that you work with a finance professional when shifting equities into debt investments. This ensures that you take this step in the most tax-efficient way possible.

Many people try to project their retirement income and expenditures using simple math and rough estimates. However, this often leads to errors and inaccuracies.

Common mistakes when calculating retirement income are not accounting for inflation or taxes. If a major variable is not considered, a significant miscalculation may occur.

It is recommended that you work with a financial advisor who is equipped to consider all of the major variables that may affect your retirement income or expenses.

Financial advisors with the correct software can help you run a Monte Carlo simulation. This type of simulation uses historical data to generate thousands of possible scenarios to determine the likelihood of outliving your money in retirement. 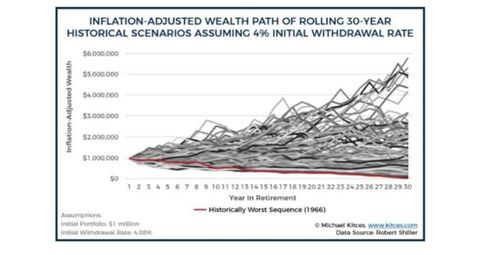 You’ll notice that with Monte Carlo simulations, most “worst-case scenarios” typically start with a steep decline in the market at the beginning of one’s retirement. This is the exact scenario of retiring into a bear market.

Fortunately for you, you can plan ahead by reducing costs during the early years of your retirement while the market is down.

To find a finance professional in your area, use Finance Strategists’ advisor search tool, or use FINRA’s BrokerCheck tool to research individual firms and advisors.

During a bear market, investors often attempt to sell stocks to offset capital gains. However, many investors are unaware of the wash-sale rule and how it can impact their taxes in retirement.

The wash-sale rule occurs when an investor sells a security at a loss and, within 30 days before or after the sale, buys a “substantially identical” security.

If the wash-sale rule applies, the investor cannot deduct the loss on the sale of the stock sold.

For example, suppose you sell Home Depot stock for a $10,000 loss and then buy the same stock (or a “substantially identical” stock, like Lowe’s) within 30 days. The wash-sale rule would disallow the $10,000 loss as a capital gains deduction.

If you plan on selling securities at a loss in order to offset income, it is important to avoid buying a substantially identical stock 30 days before or after. Otherwise, you risk losing your tax deduction for capital losses.

Retiring into a bear market can be scary. When emotions run high, it’s easy to make rash decisions.

To avoid the common mistakes people make when retiring into a down or bear market, it is important to do the following:

Avoiding the common mistakes described in this article will help soon-to-be retirees navigate bear markets and protect their retirement savings.

This article originally appeared on FinanceStrategists.com and was syndicated by MediaFeed.org.

Worried about retirement? Read this now

Previous Story:
The strange-but-true story of how Hawaiian pizza was created
Next Story:
Not a grill master? We can fix that

About the Author / True Tamplin