Timeline: What happens next with the royal family?

The death of Queen Elizabeth II of England has not only caused an outpouring of condolences as many in the UK and the world are mourning, it has also set into motion an elaborate schedule of events leading up to her state funeral on Sept. 19.

The Queen’s coffin was transported on a six-hour motorcade through Scotland Sunday after members of the Royal Family had arrived at Balmoral Castle near Aberdeen, where the Queen died Thursday. A procession and a service will follow at Edinburgh’s St. Giles’ Cathedral today, while a proclamation from the UK parliament was also made. 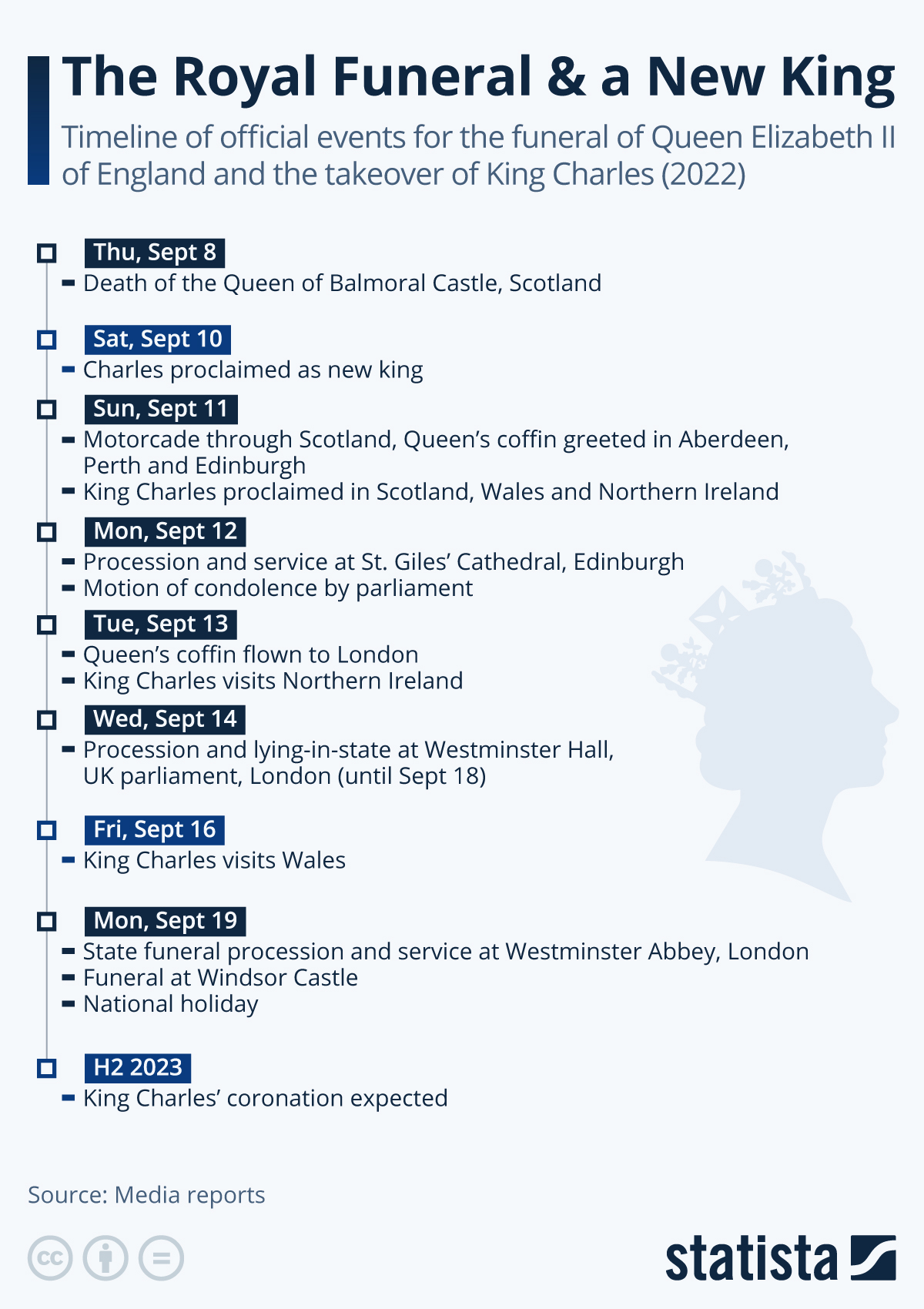 Parallel to the events surrounding the Queen’s funeral, the country’s new sovereign, King Charles, has a full schedule. On Friday, Charles and his wife Camilla were already on the way back from Scotland to London, where Charles was proclaimed King on Saturday. Prince William had also returned to London to attend the ceremony. Sunday saw more official meetings for Charles, including with the High Commissioners of Commonwealth countries. He is attending parliament Monday morning before flying back to Edinburgh to join his family for the St. Giles’ procession, all before his official meeting with Scottish First Minister Nicola Sturgeon and official condolences from the Scottish parliament.

After having concluded his business in London and Edinburgh, King Charles will visit Northern Ireland on Tuesday. The Queen’s mortal remains are meanwhile being flown back to London, where a public five-day lying-in-state will commence Wednesday at Westminster Hall in the UK parliament building after another procession that the King and the Royal Family will attend. At St. Giles’ Cathedral as well as in Westminster Hall, the Queen’s children and grandchildren are expected to stand guard at her coffin, a ritual known as The Vigil of the Princes. Charles and Camilla are to visit Wales Friday before a grand procession on Monday will accompany the Queen’s coffin first to Westminster Abbey and then to King George VI memorial chapel in Windsor Castle, where it will be laid to rest.

Royals and heads of state from all over the world are expected to attend the funeral to pay their respects, but the death of Queen Elizabeth has also reignited discussions around the colonial legacy of the Royal Family, including the origin of the regalia in their possession and the title of Prince of Wales that now is passed on to Prince William. It could also speed up the process of the removal of the British monarch as head of state in Commonwealth countries, which several Caribbean nations have already carried out.

The meticulously planned operation is internally titled London Bridge, while the crowd management for the public lying-in-state – expected to attract hundreds of thousands – is titled Operation Feather. Operation Golden Orb, another elaborately planned event, is code for Charles’ coronation, which is expected in the second half of 2023.

Previous Story:
Residual income: What it is & how to earn it
Next Story:
What to do when you don’t know what to do with your life