When inflation hits, this common investment can be a refuge

Federal Reserve chairman Jerome Powell has passed through the five stages of acceptance about inflation.

Originally nominated to the Fed in 2012 and named chair in 2016, Powell and his colleagues kept rates low and growth was steady, if unspectacular, as the economy gradually recovered from the hangover of the 2009 housing crisis.

Inflation — the rise in prices for goods and services over time — bumped along well below the target rate of 2.5%, and life was mostly good at the Fed.

When the pandemic hit, the rate fell to near zero but has been on a near-steady uptick for the last 22 months. At the beginning of 2021, Powell and his colleagues at the Fed were calling inflation “transitory” and were confident prices would soon moderate.

In late summer and early fall, Powell used words like “elevated” and a “cause for concern” as the rate moved above 4%.

By the end of November, Powell was acknowledging the obvious: Prices had soared 6.8% year-over-year last month, the fastest since 1990, and he said it was time to retire the term “transitory.”

By Dec. 15, Powell was in full acceptance mode.

“Economic developments and changes in the outlook warrant this evolution,” Powell said of the Fed’s decision to pull back on bond purchases more quickly than planned and target two to three3 rate hikes for 2022, perhaps three more in 2023.

All along, Powell and his colleagues at the Fed expressed their concerns about the job market and were reluctant to make any moves that would prevent the economy from reaching full employment. (The unemployment rate was 4.2% in November, down from 11.2% in June of 2020.)

Frederic Mishkin, a Columbia University professor and former Fed governor, believes that the economy has already reached full employment and. He said the Fed was “much too optimistic on the inflation front,” and they were distracted by their focus on the labor market.

Mishkin’s fear is that the Fed will have to raise rates higher than they would otherwise need to if they had acted earlier.

Mohamed A. El-Erian, president of Queens’ College, University of Cambridge, and a professor at the Wharton School of the University of Pennsylvania, wrote on Project Syndicate that there is still time to avoid a painful bout of prolonged high inflation.

But the Fed needs to do two things.

“It should publicly detail why it got its inflation call wrong and what is being done to avoid similar slippages in the future,” El-Erian wrote. “Second, the Fed must move a lot faster in tapering its monthly asset purchases. Easing its foot off a stimulus policy accelerator that is still essentially in a ‘pedal to the metal’ mode will help to mitigate the risk that the Fed will have to slam on the policy brakes in a disorderly manner in mid-2022.”

How is real estate a hedge against inflation?

Investing in real estate offers a couple of advantages during inflationary periods, and this recent runup is no exception. And there is scads of evidence that a diversified portfolio, one that has 20% or more invested in real estate, offers strong and stable returns.

“It’s an attractive option because rents are bound to rise along with inflation,” Brien said, which increases the cash flow for property owners.

With rates poised to rise in the next year, demand for rental homes is likely to increase as well, he added.

“If it becomes more expensive for potential buyers to finance a purchase, fewer will be able to afford it,” Brien said. “This will increase demand for single-family homes and create more upward pressure on rental prices.”

The old adage is that real estate acts as a hedge against inflation, and there are a number of reasons for that, including: 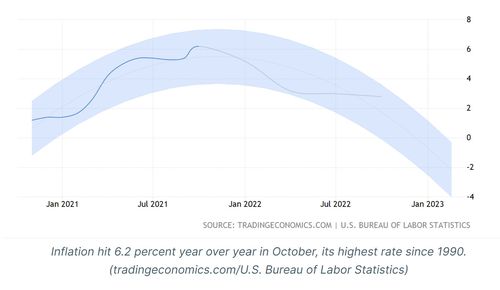 Do mortgage rates correlate to inflation?

Short-term inflation generally has little impact on mortgage rates, which are more closely linked to the 10-year Treasury bill, where rates tend to rise slowly. And when the Fed increases the one rate it controls — called the federal funds rate — mortgage rates are more likely to fall.

This is because the interest rate the Fed controls is what banks and credit unions use to lend to each other overnight. This is a very different lending market than the one for mortgages, where banks compete with one another for business.

“Thirty-year mortgage rates reflect what the market thinks rates will be over the next 10 years,” said Dennis Bron, vice president of growth for Mynd. “People don’t expect 6% inflation to last the next 10 years.”

Many forecasters expect that next year consumer prices will land closer to the Fed target of 2.5%.

The phrase “historically low” has preceded “mortgage rates” in thousands of articles about home financing over the last couple years, and that is not likely to change in the next year or so. The 30-year mortgage rate is just over 3% now, with investment mortgages available for about 1-1.5% more.

But now that the Fed is going to cease its asset-purchasing programs earlier than planned, rates could see some upward pressure.

“As they start tapering, we’ll see how much quantitative easing is affecting rates,” Bron said. “That’s a bit of an unknown.”

If rates for primary residences rise, the impact on borrowing for investors in the single-family residential sector is softened by the fact that they’re already paying higher rates than those buying a primary residence. Owning property brings with it numerous benefits.

“Even in this crazy environment, it’s still a relatively safe investment,” Bron added.

SFR investors earn cash from collecting rent, and owners who buy and hold are able to employ several strategies to reduce their tax burden, writing off many expenses associated with a rental property and taking depreciation on a home.

The runup in prices in the housing market started before the inflationary pressures of the last year, as a shortage of homes, and the pandemic-fueled migration to the suburbs and smaller cities, spurred bidding wars and double-digit-percentage hikes in many cities.

These increases are hitting families looking to buy in the single-family residential (SFR) space, as well as investors, a group that now includes some deep-pocketed institutions like JP Morgan, Blackstone and the Toronto-based investment firm Tricon Residential, which plans to invest $5 billion in single-family rental homes in the U.S. in partnership with Teacher Retirement System of Texas and Pacific Life Insurance Company.

“A lack of inventory is really jacking up home prices,” said Don Ganguly, senior vice president of Mynd Investment Management. With investors forced to pay higher prices because of the increased demand and the looming increase in rates, they are “not getting as much juice month-to-month with cash flow.”

The cost to build homes has risen dramatically in the last two years as lumber prices went through the roof (literally, they were four times their normal price in May and at one point were said to be adding $36,000 to the price of a house), even as a labor shortage and supply chain issues plagued many developers.

A semblance of normalcy is starting to settle over the housing market, part of the seasonal slowdown as winter approaches, though prices are still high and going higher in the hottest markets, like Atlanta, Phoenix, Raleigh, Charlotte

and Austin. Most forecasters predict high-single-digit increases in home prices in 2022 across the country, as opposed to the double-digit jumps of the last year or so.

For those already in the SFR market, these have been heady days indeed. And many experts believe that there are still good opportunities if investors do their homework and find properties that have potential.

“Rental housing demand is going to continue. Some percentage of people are going to work out of their houses for some period of time,” Ganguly said. “A lot of those people may not want to buy, so you are going to have a spillover from the apartment rental cohort who are looking for a home in the rental market.”

This article originally appeared on Mynd.co and was syndicated by MediaFeed.org.

The one small town worth visiting in every state

Previous Story:
When to apply for student loans
Next Story:
Where to find at-home COVID tests in 2022

About the Author / Tom Brady